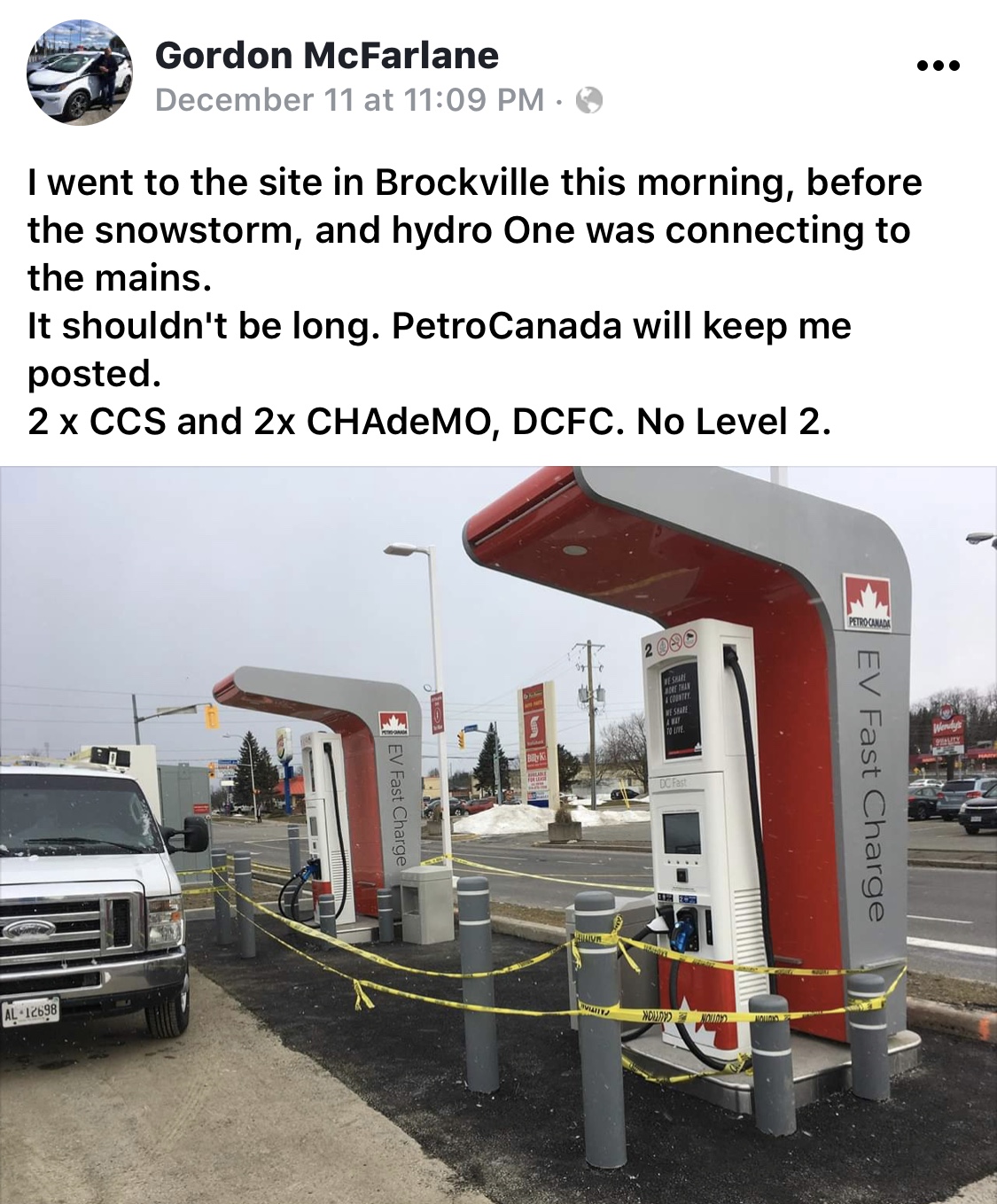 Please always check out the comment section of my blogs, these are located below, there you will find the rest of the story , additonal research and information, please also add your own comments when you can, or find relevant stories, build, learn, share.

Locally we are getting electric recharge stations. My  friend Gord McFarlane keeps me posted on the many developments that are happening.  In the beginning of a trend the costs are some times higher than established sources.

Received this commentary last night on the cost of electric cars it raises some interesting thoughts to reflect on and review in greater detail.  ~Tim

IF ELECTRIC CARS DO NOT USE GASOLINE, THEY WILL NOT PARTICIPATE IN
PAYING A GASOLINE TAX ON EVERY GALLON THAT IS SOLD FOR AUTOMOBILES,
WHICH WAS ENACTED SOME YEARS AGO TO HELP TO MAINTAIN OUR ROADS  AND
BRIDGES.....

THEY WILL USE THE ROADS, BUT WILL NOT PAY FOR THEIR
MAINTENANCE!

In case you were thinking of buying hybrid or an electric car:
Ever since the advent of electric cars, the real cost per mile of
those things has never been discussed.

All you ever heard was the mpg. in terms of gasoline, with nary a mention of the cost of electricity
to run it . This is the first article I've ever seen and tells the story pretty much as I expected it to.

Electricity has to be one of the least efficient ways to power things
yet they're being shoved down our throats.  Glad somebody finally put
engineering and math to paper.

BC Hydro spokesman ... If you really intend to adopt electric vehicles,

he pointed out, you had to face certain realities.  For example, a home charging system
for a Tesla requires 75 amp service.  The average house is equipped
with 100 amp service.  On our small street (approximately 25 homes),
The electrical infrastructure would be unable to carry more than three
houses with a single Tesla, each.  For even half the homes to have
electric vehicles, the system would be wildly over-loaded.


This is the elephant in the room with electric vehicles.   Our
residential infrastructure cannot bear the load. So as our genius
elected officials promote this nonsense, not only are we being urged
to buy these things and replace our reliable, cheap generating systems
with expensive, new windmills and solar cells, but we will also have
to renovate our entire delivery system!   This latter "investment"
will not be revealed until we're so far down this dead end road that
it will be presented with an 'OOPS...!' and a shrug.

If you want to argue with a green person over cars that are
eco-friendly, just read the following.  Note: If you ARE a green
person, read it anyway.  It's enlightening.

Eric test drove the Chevy Volt at the invitation of General Motors and
he writes, "For four days in a row, the fully charged battery lasted
only 25 miles before the Volt switched to the reserve gasoline engine.
"Eric calculated the car got 30 mpg including the 25 miles it ran
on the battery.  So, the range including the 9-gallon gas tank and the
16 kwh battery is approximately 270 miles.

It will take you 4.5 hours to drive 270 miles at 60 mph.  Then add 10
hours to charge the battery and you have a total trip time of 14.5
hours.  In a typical road trip your average speed (including charging
Time) would be 20 mph.
According to General Motors, the Volt battery holds 16 kwh of
electricity.  It takes a full 10 hours to charge a drained battery.
The cost for the electricity to charge the Volt is never mentioned ,
so I looked up what I pay for electricity.


The gasoline powered car costs about $25,000 while the Volt costs
$46,000 plus.  So the Canadian Government wants loyal Canadians not to
do the math, but simply pay twice as much for a car, that costs
more than seven times as much to run, and takes three times longer to
drive across the country. 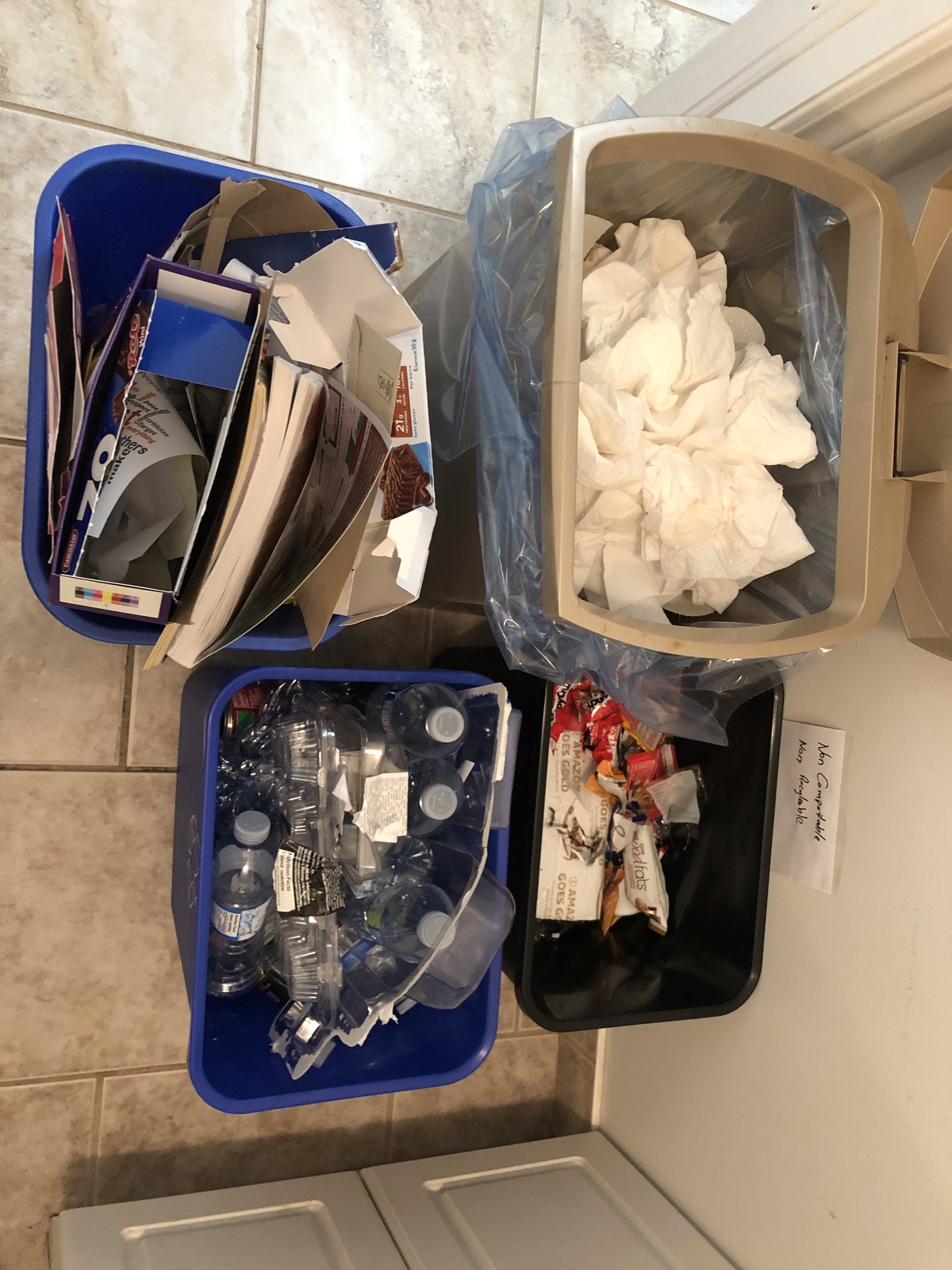 We have been doing the recycling for sometime now. Recently I decided that we need to start composting a little more seriously. So we changed our garbage can into a compostable receptor and put a little can beside it for actual garbage. The results of separation over the first week was an eye opener. Big reduction in waste.

On a mass scale this is huge. I have just did it for the office. With time will get the whole building involved. We have been doing this at the house for a couple years now with nice results. Sure saves a lot of money and trips to the dump, plus created some awesome resources for the gardens.

We all could do this. Looking forward to seeing if change can happen for you. Reduce your impact on the environment, one step at a time.

Together, lets make a difference!

Ps we setup rain barrels in 2012 when I moved on site. These help keep the fliers watered through out the dry season.

After watching the video in this article a couple things strike me.

In Canada we have the upcoming cap and trade swap of funds which I don’t see helping much. Then in  Ontario there was a massive addition to the grid of solar and wind which has been overpriced compared to fossil fuel to encourage development, but too much has been produced vs what is required, so this has beenreally messed up. A good thing has been tarnished. Perhaps I am kind and thinking this is a typical result when governments get involved.

On the positive we have capacity and excess.

However the government has missed the “find efficiencies “  part of the plan.

i heard yesterday how Ontario has to pay billions to get rid of the excess energy generated from our green solar and wind productions.

I am reminded of  Jeremie Riffkins book and presentation a number of years ago about the hydrogen economy. How that would all integrate. That advice in the book has not happened to the best of my knowledge, or I have not seen it.  If it did and it should we would have a pretty amazing system amen stewardship of our green resources.

Ontario government has just cancelled I believe over 700 new installation contracts as it has too much electricity and no way to store it. https://www.spreaker.com/episode/16149573

Money should have been invested into the storing as part of the Hydrogen Economy. Maybe it is happening someplace.  Let’s hope that vision gets resurrected and we move forward in this world.

That part of the production has to be realistically fixed before moving forward with more large scale green energy production in a perfect world. Saying that it should still be expanded. Would be good to find lower cost options for solar and wind as well. We all should be producing our own if and when possible.

This is not my only thought on the matter, a simple observation.